Cookie preferences
This website uses cookies, which are necessary for the technical operation of the website and are always set. Other cookies, which increase the comfort when using this website, are used for direct advertising or to facilitate interaction with other websites and social networks, are only set with your consent.
Configuration
Technically required
These cookies are necessary for the basic functions of the shop.
"Allow all cookies" cookie
"Decline all cookies" cookie
CSRF token
Cookie preferences
Currency change
Customer-specific caching
Individual prices
Selected shop
Session
Comfort functions
These cookies are used to make the shopping experience even more appealing, for example for the recognition of the visitor.
Note
Statistics & Tracking
Affiliate program
Track device being used
Categories
Information

The analog output module TCW280 features two outputs that can be configured to operate as voltage- or current-loop-outputs. Additionally, four open-drain outputs, which can be used as PWM or simple digital outputs, are available. Two independent relay outputs with normally open (NO) or normally closed (NC) contacts broaden the possible applications. The outputs can be controlled manually via the web browser, or automatically via a timed schedule, as well as via multiple interfaces such as SNMP, HTTP-API or Modbus/TCP.

The power monitoring module TCW260 offers four S0 compatible meter inputs and six analog outputs that can be configured as voltage or current inputs. Additionally, the RS-485 interface makes it possible to read 24 Modbus registers. The data can be queried via a web browser or one of the featured network interfaces such as SNMP, HTTP or Modbus/TCP.

The devices are available from the egnite Shop as of now. 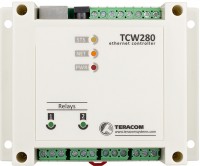 © egnite GmbH 1997-2021 Impressum | Datenschutz
This website uses cookies, which are necessary for the technical operation of the website and are always set. Other cookies, which increase the usability of this website, serve for direct advertising or simplify interaction with other websites and social networks, will only be used with your consent. More information.
Decline Accept all Configure